How Ultrasound Tests Gold and Silver

How Ultrasound Verifies the Authenticity of Gold and Silver Bullion

The enormous and financially destabilizing problem of counterfeit gold and silver bullion is becoming increasingly sophisticated. A gold bar with similar density tungsten inserts or a silver bar containing an equally dense composition of lead, tin, copper or other base metal alloys is able to pass traditional non-invasive tests for authenticity. These tests include density, acid scratching, X-ray spectrometry, and radiography. X-ray fluorescence commonly used by precious metals dealers will not penetrate the surface more than approximately 10 microns, which is about 1/10th the width of a human hair. Thankfully, for investors in bullion, ultrasound technology provides the most simple, affordable, and non destructive alternative to drilling into bullion and bars and assaying samples from their cores. 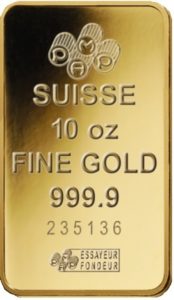 Ultrasonic detection involves measuring both the velocity of sound in a solid and the distance it travels. Sound velocity is dependent on the elasticity and density of the solid. Together with density testing, differences in sound velocity between precious metals, and the base metals used to counterfeit them, guarantees detection of fakes. Ultrasonic measurement calculates the distance sound waves of a known velocity travel through a gold or silver bar and echo back to the surface. This distance is compared with the measured width of the bar.

For example, a PAMP Suisse 10oz gold bar has a thickness of 8.3mm. If that bar was comprised of tungsten instead, and the instrument is pre-selected for the velocity of gold, it would return a measurement of only 5.2mm. The discrepancy represents the proportion that the sound velocity for tungsten (5170 m/s) is faster than the sound velocity for gold (3240 m/s). If the dimensions of the bullion being tested are not known then a vernier caliper or micrometer can be used to measure them. Any result that significantly varies from the known thickness warrants further investigation.

Ultrasonic sound waves emitted from the transducer will respond to interfaces between different materials when variance in sound velocities cause waves to be reflected. Any unexpected measurements recorded across a single bar may indicate tampering with inserts, thick plating, or voids, and warrants further investigation.